Both the Aussie’s and Kiwi’s claim to own the pavlova – a simple dessert consisting of a meringue base, topped off with whipped cream and fresh fruit. They’ve been fighting over this title ever since the dish was named after Russian ballerina, Anna Pavlova, when she visited both countries back in the 1920’s.

In my opinion, it simply isn’t summer without a pav. Loaded up high with freshly whipped cream (my girls’ favourite) and topped with whatever fresh fruit you’ve got on hand – it just screams the silly season! My favourite topping is passionfruit and strawberries, but mango is delicious too. Or pile it up high with blueberries, cherries and raspberries and if you’re really going all out – shave some chocolate over the top.

And this is such an easy and delicious recipe. Tried and tested – it’s stamped on my mother-in-laws pavlova plate and never seems to disappoint. Lovely and crunchy on the outside and nice and soft and goo-ey on the inside, it’s the perfect dessert to throw together for a dinner round the pool with family and friends.

I’ve never met anyone that doesn’t love a bit of pav, but I’ve talked to heaps of people that have never had a go at making it. Make today that day. Using very minimal ingredients, it’s an impressive dessert to take along to a barbie and you’ll be proud of yourself for mastering it. Make it your ‘thing’ this Christmas.

New Zealand/Australia, to me it doesn’t matter who thinks the pavlova is theirs. As long as it graces many a dining table during the month of December, I’ll be happy. 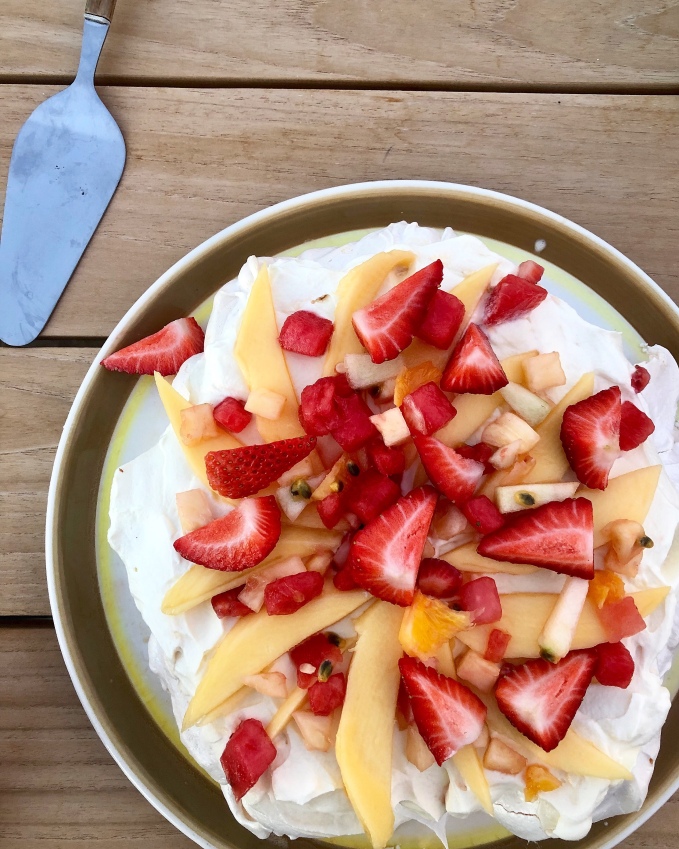 To make the whipped cream – Using a hand mixer – beat together 300ml of thickened cream, with a teaspoon of icing sugar and dash of vanilla extract. Beat until it’s nicely whipped and holds together well.

If you make this pav, please leave your comments below. xx